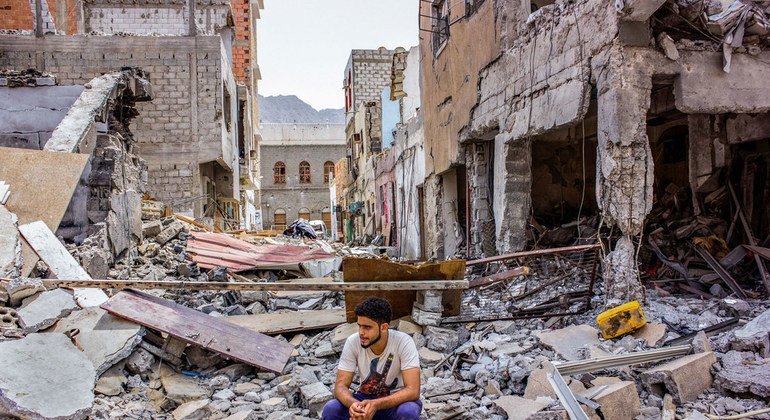 Yemen has been mired in seven years of fighting between a pro-Government Saudi-led coalition and Houthi rebels, generating the world’s worst humanitarian and development crisis and leaving the country teetering on the brink of famine.

The report sends a hopeful message that all is not lost, arguing that its extreme poverty could be eradicated within a generation, or by 2047, if the fighting ceases.

“The study presents a clear picture of what the future could look like with a lasting peace including new, sustainable opportunities for people”, said UNDP Administrator Achim Steiner.

“To help to get there, the entire UN family continues to work with communities throughout the country to shape a peaceful, inclusive and prosperous future for all Yemenis”.

The brutal war in Yemen has already caused the country to miss out on $126 billion of potential economic growth, according to UNDP.

The UN humanitarian affairs office, OCHA, has estimated 80 per cent of the population, or 24 million people, rely on aid and protection assistance, including 14.3 million who are in acute need.

Through statistical modeling analyzing future scenarios, the report reveals how securing peace by January 2022, coupled with an inclusive and holistic recovery process, can help to reverse deep trends of impoverishment and see Yemen reaching middle-income status by 2050.

Furthermore, malnutrition could be halved by 2025, and the country could achieve $450 billion of economic growth by the middle of the century.

While underlining the primacy of a peace deal, the report emphasizes the need for an inclusive and holistic recovery process that crosses all sectors of Yemeni society and puts people at the centre.

Investment must be focused on areas such as agriculture, inclusive governance, and women’s empowerment.

Auke Lootsma, UNDP Resident Representative in Yemen, stressed the importance of addressing what he called “the deep development deficits” in the country, such as gender inequality.

“I think it’s fair to say that Yemen, whatever gender index you look at, it’s always at the bottom,” he told UN News ahead of the report’s launch.

“So, bringing women into the fold, making them part of the labour force, and really empowering women also to contribute to the recovery and reconstruction of Yemen is going to be incredibly important”.

The report was carried out by the Frederick S. Pardee Center for International Futures at the University of Denver, located in the United States, and is the third in a series launched in 2019.

While outlining potential peace dividends, it also provides grim future trajectories should the conflict continue into 2022 and beyond.

For example, the authors project that 1.3 million lives will be lost if the war continues through 2030.  Moreover, a growing proportion of those deaths will not be due to fighting, but to the impacts on livelihoods, food prices and the deterioration of health, education and basic services.

UNDP said there is no time to waste, and plans to support recovery must be continuously developed even as fighting continues.

“The people of Yemen are eager to move forward into a recovery of sustainable and inclusive development,” said Khalida Bouzar, Director of its Regional Bureau for Arab States.

“UNDP stands ready to further strengthen our support to them on this journey to leave no one behind, so that the potential of Yemen and the region can be fully realized – and so that once peace is secured, it can be sustained”.

Meanwhile UN humanitarians are extremely concerned about the safety of civilians in northern Marib governorate, which is home to some one million displaced people.

UNHCR, the UN refugee agency, warned that as the frontlines of conflict shift closer to heavily populated areas in the oil-rich region, those lives are in danger.

“Rocket strikes close to the sites hosting the displaced are causing fear and panic. The latest incident was reported on 17 November when an artillery shell exploded, without casualties, near a site close to Marib City. UNHCR teams report that there is heavy fighting in the mountains surrounding the city and the sound of explosions and planes can be heard day and night”, she elaborated.

UNHCR is warning that further escalation of the conflict will only increase the vulnerability of people in Marib, and is calling for an immediate ceasefire in Yemen.