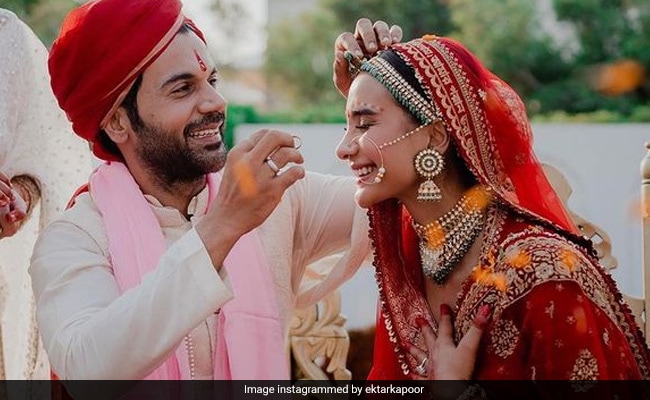 Ekta Kapoor, who couldn’t attend her close friends Rajkummar Rao and Patralekhaa‘s wedding and reception in Chandigarh on Monday, explained the reason for her absence in an Instagram post on Tuesday. Ekta, who combined the post with a congratulatory message for the newlyweds, stated that even since she flew to Delhi to receive her Padma Shri Award earlier this month, she has been suffering from a stomach-related issue, due to which she couldn’t travel from Mumbai to Chandigarh. She added that she hasn’t been well for the past ten days. Ekta Kapoor flew to Delhi on Sunday and returned a day later after receiving her Padma Shri Award.

“Due to my stomach issues (now 10 days right from Delhi) I could not travel and be where this beautiful couple tied the knot,” wrote Ekta Kapoor wished the couple with these words: “But Patra and Raj, you both make me believe in love! I cannot tell you both how happy I am! I rarely see love like you both have! When Raj talks about Patra, it makes me believe that love and happiness and caring are not transient! Best wishes to you both.”