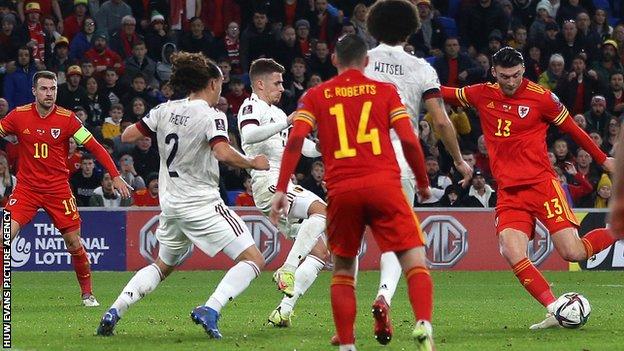 Kevin de Bruyne’s elegant 20-yard shot put the world’s number one ranked side in front in the 12th minute.

Cardiff City Stadium erupted as Kieffer Moore equalised later in the first half for the hosts, whose tenacious performance fed a febrile atmosphere.

Neco Williams almost snatched a late win for Wales but his vicious swerving shot was well saved by Koen Casteels.

As it transpired, the draw was enough to seal what could be crucial home advantage in March’s play-off semi-finals.

Wales had already guaranteed a play-off place thanks to their success in the Nations League, and their point against Belgium was enough to secure second spot in Group E despite the third-place Czech Republic’s win over Estonia.

Now they are seeded for the semi-finals, Wales have managed to avoid daunting away ties against European champions Italy or Euro 2016 winners Portugal and could instead host the likes of North Macedonia.

Wales will discover their semi-final opponents when the draw is made on Friday, 26 November.

Regardless of the opposition, however, Wales can take great pride and hope from the fact they are now closer to qualifying for a World Cup than they have been since their only other appearance in 1958.

Wales prosper on the night of permutations

While this was a potentially complex evening for Wales, there were two simple facts about the task they faced.

It was a draw which would bring in the other permutations. Then Wales would rely on results in other groups, needing Turkey not to win in Montenegro by four goals.

Montenegro kept their side of the bargain by limiting Turkey to a 2-1 victory – but the added complication for Wales was that they were up against the best team in the world.

Group winners Belgium had already qualified automatically and, although they were without stellar talents such as Chelsea striker Romelu Lukaku and Real Madrid attacking midfielder Eden Hazard, they were still able to name a formidable line-up.

De Bruyne exemplified that star quality with his goal. The captain reacted quickly to a blocked shot and, with barely any backlift, the Manchester City midfielder elegantly guided his curling first-time shot into the net.

Belgium took control from that point but, for all their domination, Roberto Martinez’s side did not add to their lead.

They continued to threaten after Moore’s leveller, most notably when De Bruyne’s free-kick was floated out to the edge of the penalty area, where Thorgan Hazard connected with a sweet volley which hit the post.

But even as the game became stretched in the closing stages as Wales tired from the physical exertions of competing against such classy opposition, it was the home side who finished strongest.

Williams came close to scoring a spectacular late winner and, although Casteels pushed the shot away, the celebratory scenes after the final whistle demonstrated how much of a result to cherish this was for Wales.

Wales were without their captain and all-time leading goalscorer Gareth Bale, ruled out on the morning of the game following his 45-minute appearance in Saturday’s 5-1 thrashing of Belarus, his first appearance after two months out with a torn hamstring.

Bale’s absence did not seem to affect the home side in the early exchanges, as they started purposefully, pressing their illustrious opponents high up the field

Once De Bruyne scored Wales had to endure long spells without the ball, but they diligently kept at their task of containing the world number ones and still posed a fleeting attacking threat of their own.

That was enough to bring them level in the 32nd minute. Daniel James had two crosses blocked on the left wing and, at the third attempt, the ball evaded two wild lunges from Axel Witsel and Arthur Theale and fell to Moore, who controlled the ball with his midriff and struck a low shot beyond Koen Casteels in the Belgium goal.

The celebrations were raucous. The goal felt precious as well as significant, coming as it did from Wales’ first shot on target.

Although Belgium enjoyed as much as 75% possession at times, Wales applied themselves superbly with a spirited team effort and had chances to claim another memorable victory over Belgium, whose only defeat in their previous 47 qualifying matches had come here at Cardiff City Stadium in 2015.

In March, they will have a chance to create yet more magical memories, with Turkey, Poland, North Macedonia, Ukraine, Austria or Czech Republic standing in the way between Wales and a play-off final which could take them to a first World Cup since 1958.