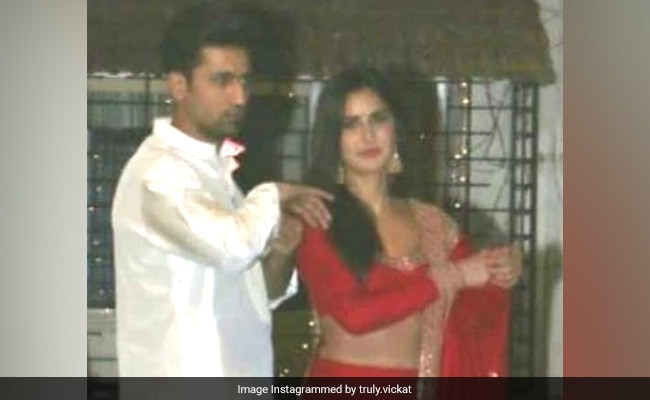 A throwback of Katrina Kaif and Vicky Kaushal. (courtesy truly.vikat)

Not a day goes by when Katrina Kaif and Vicky Kaushal are not on the top of trends list, courtesy their wedding reports. According to reports, the stars are all set to get married next week. A recent report by Bollywood Life stated that that the couple will have a court marriage next week in Mumbai before they fly to Rajasthan for the festivities.” Before their wedding rituals in Rajasthan, Vicky and Katrina will be getting married in Mumbai. A source close to the actress tells us that Vicky and Katrina will have a court marriage in Mumbai next week before they head to Jaipur for their royal wedding at the resort near Ranthambore,” Bollywood Life report stated.

On Wednesday, another report surfaced that stated that Katrina Kaif and Vicky Kaushal will have a no-phone policy at their wedding. An source told India Today, “This is a big day for both of them, so it’s obvious that they are going all-out to ensure that there is no situation where photos and videos are being leaked on social media without them knowing. Katrina and Vicky are hands-on with the wedding prep and there is an elaborate team put in place to ensure privacy and security.”

Earlier this week, an  ETimes report stated that Katrina Kaif has shifted her entire focus on her wedding, except shooting for a few commercials, and is coordinating with Vicky Kaushal’s brother, actor Sunny Kaushal, and his mother for all the preparations. According to the report, Vicky Kaushal is “busy with his professional commitments” and his family is taking care of his wedding preparations.

Several media reports stated that Katrina Kaif and Vicky Kaushal are set to get married in December. They reportedly got engaged on Diwali at director Kabir Khan’s house. The venue and ensemble details were also shared. The duo will get married at a royal palace named Six Senses Fort Barwara in Sawai Madhopur in the first week of December. The rumoured couple will reportedly wear ensembles designed by Sabyasachi.

Back in 2019, Vicky Kaushal and Katrina Kaif trended big time after they were spotted at a dinner date in Mumbai. Photos from the date went insanely viral on social media. ICYMI, this is what we are talking about:

During an episode of Karan Johar’s talk show Koffee With Karan 6 in 2018, Katrina Kaif said that she would “look good with Vicky Kaushal on screen.” Vicky Kaushal appeared to faint when he was told about Katrina’s statement during the show.