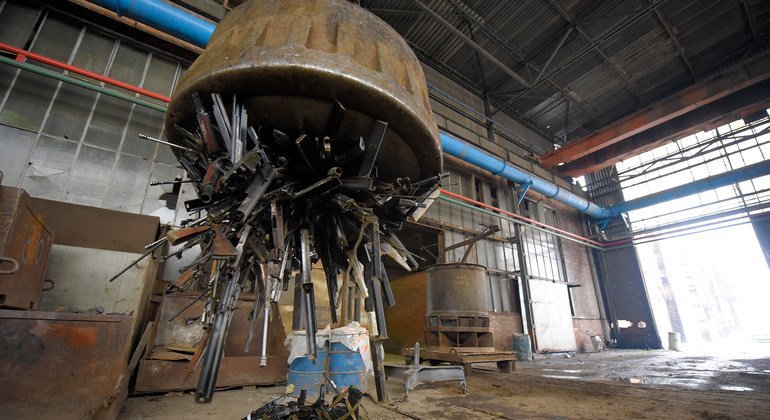 Robin Geiss said that that diversion and trafficking of arms “destabilizes communities and exacerbates situations of insecurity, including by committing serious violations of international humanitarian law and human rights law, as well as violence against women and children in various contexts”.

The Council met under the chairmanship of Mexican Foreign Secretary Marcelo Ebrard as one of the signature events of Mexico’s November presidency.

As the unrestricted flow of weapons continues to fuel violence, it is a shared global responsibility to seek solutions, according to the concept note.

Throughout the lifecycle of arms and ammunition – from the production stages to their final use – moments exist when they can be diverted or trafficked to non-State armed groups, criminals and terrorist actors.

Mr. Geiss upheld that this “destabilizes communities and exacerbates situations of insecurity, including by committing serious violations of international humanitarian law and human rights law, as well as violence against women and children in various contexts”.

While direct effects include deaths, injuries, displacement, and psychological harm, there are also long-term socio-economic consequences, such as access to health and education, the delivery of humanitarian services, and the protection of civilians.

For Mr. Geisss, this illicit trade is also dynamic and multi-faceted.

“When loopholes and gaps are closed in one domain, vulnerabilities are exploited in another”, he said. “States affected by patterns of recurring armed violence, therefore, face many challenges to prevent the diversion and misuse of arms”.

A UNIDIR review of 200 documented cases highlighted the importance of preventing diversion, not only from national stockpiles, but also from the country that manufactured and exported them.

“National ownership is fundamental” in this area, said Mr. Geiss, but “will not achieve success without international cooperation and assistance”.

Between 2015 and 2020 the UNIDIR supported 11 States in conducting assessments on weapons and ammunition management, known as WAM.

Today, the Institute’s chief said, the issue is increasingly recognized as a fundamental component of conflict and armed violence prevention.

He cited as examples, the Secretary-General’s small arms reports, which regularly feature a section on it and also that it is increasingly reflected in resolutions adopted by the Security Council.

Mr. Geiss described now as “an opportune moment” for an international dialogue to strengthen multilateral, regional, and national policies and practices.

“Advancing a United Nations strategic approach to WAM could further enhance multilateral efforts to deliver peace, security, stability, and development around the world”, he argued.

She upheld that the “devastating impact” of this problem “is felt most acutely among communities in conflict-affected regions, where these weapons perpetuate a vicious cycle of violence and insecurity.”

Ms. Devoto also said that mandatory Security Council arms embargoes are being undermined by violations carried out by non-State actors and even UN members.

“The most egregious recent example is the Libyan embargo, which, in March this year, was described by the Panel of Experts as ‘totally ineffective’”, she recalled, urging Council Members to act, including through sanctions.

“Mr. President, you and your colleagues have at your disposal the tools, knowledge and experience to combat the illicit trafficking and diversion of small arms and light weapons. It’s about finding the political will to do it”, concluded Ms. Devoto.